Note: The lettering of these trail junctions is arbitrary. These are not official designations, and you won’t find them on any published map, but they are useful for referring to locations.

For some of these junctions, waypoints are provided on Motion-X (they were created in the Motion-X GPS HD app on my iPad) and Dropbox. Motion-X says that the links expire after six months, though so far none of mine have expired. Since the Dropbox links depend upon my filing hierarchy, they may become inactive.

There is a sign post at the junction of the Pacific Crest Trail and the “Squaw Valley Trail” (this is not an official name). This junction is just south of the Granite Chief saddle. The “Squaw Valley Trail” heads east towards Watson Monument, and connects with the eastern branch of the Tevis Cup Trail. As of 2013, this sign is deteriorating badly and difficult to read on all sides.

A single sign on post marks this trail junction, pointing along the Squaw Saddle Trail towards Five Lakes. The Pacific Crest Trail is not noted other than the PCT logo on the sign post, which is confusing. Look to the PCT logos a short ways down the northbound and southbound PCT trail for confirmation about your trail.

A vertical post marks this trail junction, with destinations on all four sides. To the south, the PCT and TRT coincide. To the north is the PCT, and to the west is the TRT.

Between this junction and the junction with the PCT, there is a junction with an old, unmaintaned trail that comes from Five Lakes, currently unsigned though there is still a signpost there. 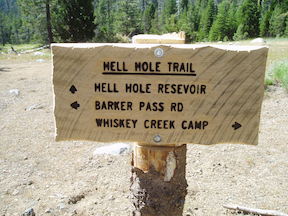 Three trails come together at this junction, the Powderhorn Trail, the Five Lake Creek Trail, and the Hell Hole “trail” which is only partly maintained. The junction is in an open meadow. It has never been clear to me whether the name “Diamond Crossing” refers to this trail junction, or to the point where the Hell Hole trail crosses Five Lakes Creek.
Note: As of 2014-08-07, this sign is on the ground. 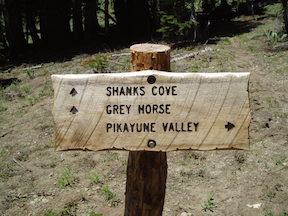 There is no trail sign, and essentially no indicator of this trail junction. At a dry meadow just to the west of Buckskin Creek, there is a single, out-of-place rock in the meadow which marks the departure of this very-hard-to-follow trail. See the description of the Buckskin Trail for more information.

There is no trail sign, and essentially no indicator of this trail junction. Rather than the junction location just east of Steamboat Creek, the junction is actually west of Steamboat Creek. The only evidence is a large Incense Cedar with the trail blaze on the side facing the trail, and two nails in the tree. See the description of the Buckskin Trail for more information. This may be the point at which the Hell Hole “trail” (15E17) changes to the Hell Hole “route” (15E18).

There is no trail sign, and essentially no indicator of this trail junction. The trail from the “trailhead” on the jeep road continues east and terminates at the reservoir shore. The Hell Hole Trail heads uphill from a location that is not marked other than with a few obscure small cairns. At the McKinstry Trailhead, there is a sign, but the distance are completely inaccurate.

This site uses Akismet to reduce spam. Learn how your comment data is processed.