I had an interesting trip through the Granite Chief and surrounding areas last week, starting at Barker Pass and coming back to it after some wild times through the Rubicon River drainage, Hell Hole Trail, and Bear Pen.

I started at Barker Pass, walked south along the PCT/TRT to Miller Creek, and then headed west on the Rubicon “trail” which is an OHV trail. I’d heard about this trail for years, but had avoided it, and certainly never driven it since I have only a passenger car. I actually enjoyed the people I talked to along the way. Hiking up out of the Rubicon River, the OHV trail gets worse and worse, but the traffic seems to stay low and the people friendly and responsible. From Buck Island Lake north, closer to “civilization,” however, the people get worse and worse. More trash, more blaring music, more frowns, more toilet paper everywhere, more transmission fluid on the ground, fewer Jeeps and more breakdowns. I was glad to leave the OHV trail and head north along a logging road. Of course on that road there where whining crotch rockets, zooming up and down, for entertainment value. It is interesting to see when things cross over from people who use their vehicles, of whatever sort, to access nature, and when they use them simply for entertainment and could care less about nature.

I’d seen on my TI 804 map the McKinstry Trail and figured I’d follow it. The trailhead sign give the wrong mileages, 1-1/2 to the Rubicon River and 2-1/2 to Hell Hole Reservoir, but the correct mileages should be 3.6 to the Rubicon and another 4.1 to the Hell Hole Trail. The trail starts out OK, needing maintenance, but gets vague as it drops into the gorge. After crossing the dry creek coming out of Little McKinstry Meadow, it pretty much disappears. The bears are the ones keeping these trails open, and I saw a large light brown bear in the brush. Once out onto the granite bench it is a little more obvious, but not much, and then it drops into the reddish metamorphic rock heading down the last part to the river. Which is beautiful! A portion of the Rubicon River flow gets shunted off into the South Fork of the American from the Rubicon, part of a complex plumbing system managed by SMUD, mostly meant to generate power but also for water supply. The trail starts along the south side of the river, but quickly is lost in logging debris. This area was apparently helicopter logged, since all the large trees are gone but there are no roads.

Looking at the TI map which shows the trail crossing to the north side, I guessed at a place to cross over and eventually found some cairns and a vague trace of trail. Which faded out. I wandered around in the area between the Rubicon and Five Lakes Creeks for quite some time that day and the next, not lost really but trying to see if there was a pattern. No. There are a number of cairned routes, but none are clearly right, or wrong. Anyway, it’s cool terrain with long ridges of granite and routes following the tops or going up and down over them. 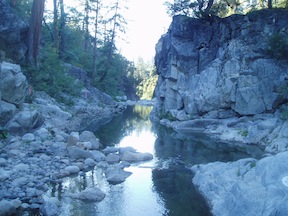 As can be seen from a map, Five Lakes Creek steepens considerable just before coming down into the relatively flat (relatively!) area along the Rubicon. I’ll leave it to you to figure out what this means, but I felt fortunate to find what is there. The next day I tried, with mixed success, to follow an old trail along benches north of Five Lakes Creek. It too scatters into a complex of cairned routes, the main one of which peters out on the shoreline of Hell Hole Reservoir. I gave up trying to follow cairns and walk the shoreline – the reservoir was down at least 50 feet – all the way to Grayhorse Creek. I found the road, shown on the map, that ends at Grayhorse Creek (though it once went up the hill to a mine) and followed it west a ways, trying to find a trailhead. No. The old trail takes off on the left just before the road makes its last steep downhill to Grayhorse Creek, just a vague trace through the grass. Once on it, I could follow it fairly well for quite some time. There are some great pools where it crosses Grayhorse. The trail again starts to fade and dumps out on the shoreline not too far from where the other trail dumps out coming west, but there is no clear connection between the two. What I was really looking for, of course, was the trail uphill, the Hell Hole Trail into the Granite Chief Wilderness.

If finally found the Hell Hole Trail while looking for the other. From a vague junction unmarked by a sign or cairn, it heads nearly straight uphill, visible in some places and with traces of construction, marked by cairns. I was able to follow it until it went into the eroded gully south of Little Steamboat Mountain. Here different routes proliferated, and I picked one that headed over to the bench Five Lakes Creek, quite a pretty bench with great views from the low ridge just to the south. But the trail is on the bench above, so I climbed to it and found it fairly easily. From here all the way to Diamond Crossing the trail is fairly easy to follow, though with a lot of downed trees and debris. I’d guess it hasn’t been maintained in 20 years or more. Steamboat Creek was dry, and Buckskin Creek had a tiny flow. I looked for but did not see signs or trail traces of the Buckskin Trail shown on the TI 804 map. 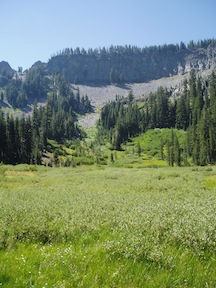 After camping beside Five Lakes Creek and enjoying the sounds and reflections, I headed up Bear Pen Trail. This trail is easy to follow, with some trees down and debris, but nothing major. The trail ends at a beautiful round meadow in an spectacular amphitheater of volcanic rocks. I headed cross-country up through the trees east of the meadow and gained the crest at the overlook point that many people enjoy after climbing out of North Fork Blackwood Creek. From there, an uneventful hike back along the PCT/TRT to Barker Pass.

On this entire trip, and some exploring on old logging roads I did the next day, I’ve been looking at the Rubicon River canyon, with an eye towards walking the canyon from the crossing of the Rubicon OHV trail down to the head of Hell Hole Reservoir. It looks possible, but rough country like this can hide a lot of things!

This site uses Akismet to reduce spam. Learn how your comment data is processed.